A book review of Summers Under the Tamarind Tree - Recipes & Memoirs from Pakistan by Sumayya Usmani.

I love reading! Books have been my companion for as long as I can remember. My favorite genre has to be fantasy – tales filled with magic and mystery maybe a dragon or two. However, I keep switching from genre to genre depending on my mood. There was a time in university when all I would read was chick-lit and romance – predictable happy endings.

These days I have switched to a complete different genre – cookbooks. I know people think of cookbooks as just as a list of ingredients with steps on how to make a specific dish. But a good cookbook is so much more than that. A good cookbook tells you about the author; about why they love a particular recipe. A well-written cookbook gives you a glimpse into the author’s kitchen; it tells you about their life – where they were born, the cultures & traditions that shaped the way they cooked.

So when I came across an advertisement by Liberty Books of a new book being launched by Sumayya Usmani – the food blogger behind ‘The Tamarind Kitchen’ I was like I need to get it ASAP! Logged into Liberty Books online, placed and order and got it delivered the next day. Got a canvas bag and a recipe card as a surprise.

The book is titled ‘Summers Under the Tamarind Tree – Recipes & Memoirs from Pakistan’. Out of my entire cookbook collection (and I have loads – both in print and kindle version) there are only a few Pakistani cookbooks that I enjoy. Mostly because the recipes have no stories – it’s just a compilation of ingredients & steps without any meaning or purpose. A recipe collection written by the publisher rather than the author. 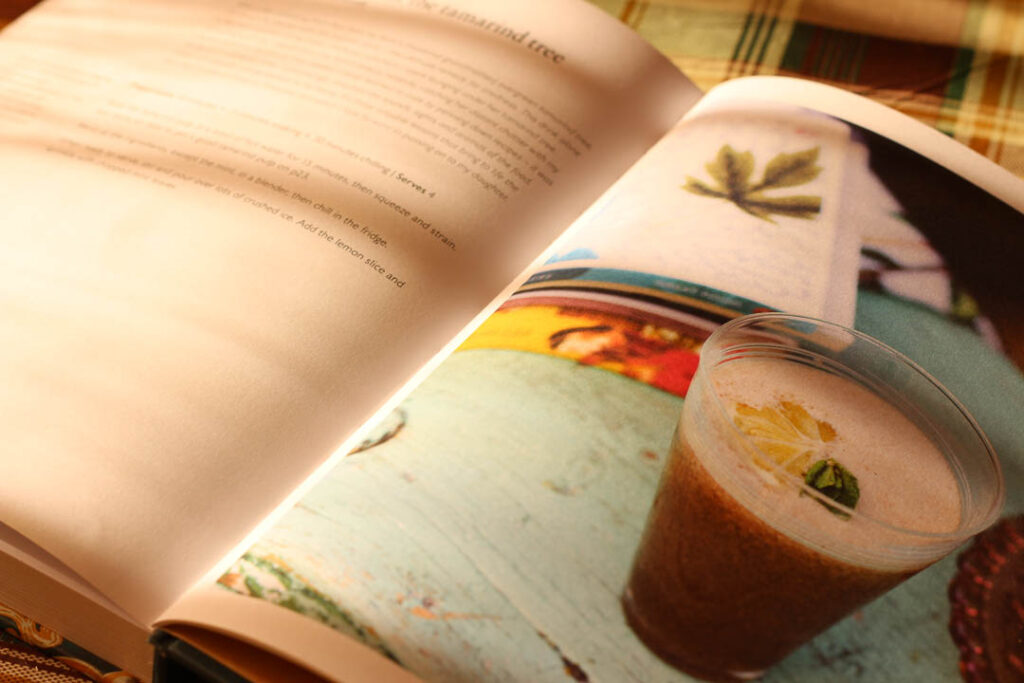 This cookbook is different. It's a collection of memories; of the author growing up, learning how to cook; enjoying precious moments with her friends & family in the midst of food & drink. Their are family recipes and recipes which have been inspired by childhood memories and flavors experienced while growing up.

The recipes in the book are pretty much what you would expect in a typical Pakistani kitchen. Cholay ka salan with Aloo ki Bhujia for breakfast with Puri's (p. 61). Lunch could be Bihari kebabs with a refreshing kachumber salad and raita with tandoori naan. Dinner could be karhai ginger chicken with an Afghani lamb pulao followed by khubani ka meetha for dessert. Samosa's & Dahi bara's in Ramazan and sheer khurma for Eid-ul-Fitr. Sarsoon ka Saag (p. 134) with Makai ki roti in the winters with chilled aam ka panna in the summers. There's a collection of recipes from all provinces - Sindhi thadal (p. 204), Punjabi Murgh Cholay, Baluchi style chicken sajji and salty Kashmiri chai (p. 200).

Just like her blog, there is experimentation in the recipes she has shared for e.g. apple pakora's and mutton chops flavored with a rose petal garam masala (p.89). But her focus is on the basics which is appreciated by the basic Pakistani cook.

In excitement of receiving the book, I tried out two of her recipes. The first being the chicken makhani handi with coconut milk and fenugreek. The second being the tamarind sherbat which was the inspiration behind the book title. I loved the creaminess of the chicken gravy with the hint of coconut - a bit decadent to cook on a regular day but definitely something for the dawaat! The sherbat was a bit khatta for me - more sugar & lots of ice-cubes tempered the flavor to create a refreshing summer drink.

As the book is published in England, the ingredients are British. For e.g. there's granny smith apples, orange shakar kandi and Maris Piper potatoes. Names that might sound strange to us but are just British terms for local fruits & vegetables. We can just use our Desi sabzi phal to make the recipes in the book - after all, the cookbook  focuses on Pakistani recipes and what better place is there to cook them than in a Pakistani kitchen!