Today I am sharing a twist on the traditional Pakistani chapli kabab by making chapli kabab sliders or mini chapli burgers. Mini slider buns are topped with green chutney raita, crispy and crunchy chapli kabab patty, tangy tamarind chutney, and your favorite toppings. It’s the perfect appetizer for a dawaat, a birthday party, a high tea, or just to have with your shaam ki chai (evening tea). Enjoy the classic chapli kabab flavors in a mini version that’s easy to eat and serve.

What are chapli kababs?

Chapli kabab is a specialty of Pashtun cuisine, and a dish that’s popular in Pakistan as well as Afghanistan. In Pakistan, the most famous chapli kababs can be found in the city of Peshawar, the capital of the province of Khyber Pakhtunkhwa (formerly known as NWFP). It’s why they are also called Peshawari kabab. The name of these kababs originates from the Pashtu word chaprikh, which means flat and these kababs are known for their distinctive flat and round shape. They are usually served with naan, and chutney.

The traditional chapli kababs are made of either beef or lamb mince, with a high fat content (20 – 30%) and the mince used is a coarse style mince, which is ideally hand ground. They are also fried in beef or lamb fat (known as tallow). I find the smell of lamb mince too strong which is why I use either beef mince or turkey mince to make the chapli kabab sliders, and I fry them in oil.

Another thing that is distinctive about chapli kabab is the spice blend used to make them. The spices used are coarsely crushed instead of being turned into fine powder, adding a distinctive crunch to the kababs. One of the most essential spices in chapli kabab are dried pomegranate seeds (known as anardana), which are coarsely crushed and then added to the mince mixture. These add a tangy flavor and texture to the kababs. Other spices that are used are cumin seeds and coriander seeds, both of which are dry roasted, and then coarsely crushed. The heat in the chapli kababs comes from red chili flakes, and green chilies. The spice level can be adjusted to personal taste.

For this recipe, I have taken the classic chapli kabab flavors and turned it into a mini version that's easy to eat and serve.

Adjust the fillings of these chapli kabab sliders or mini burgers as per your personal taste. At your next BBQ party, serve chicken malai tikka and also do a DIY slider section so everyone can make chapli kabab their way.

Here are some options on how you can change things up:

Looking for more kabab recipes. Check out the following:

Would love it if you could try out and rate the recipe, and let me know how it was in the comments below! To keep updated with recipes, stories and so much more follow me on Facebook here and Instagram here 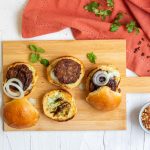 For the spice blend:

For the chapli kabab mixture:

For the chapli kabab: