A staple Pakistani and North Indian meal, aloo keema or keema aloo is made using ground mince (aka keema) and potatoes. It is usually served with roti or chapati and is delicious with Basmati rice too. It’s also delicious served with a quick kachumber salad or a refreshing yoghurt raita.

Keema (also called qeema) means minced or ground meat in English. In the Indian subcontinent any dish that is made with minced meat is also known as keema. Indian and Pakistani restaurants abroad will usually write keema curry or ground mince curry on the menu as a means of explanation. However, in local terminology the dish is just called keema.

The most common ground meat option is ground beef (or beef keema). Other options include ground chicken (known as chicken keema), ground lamb (known as lamb keema), and ground goat (known as mutton keema). Another option that is more common abroad is ground turkey mince (or turkey keema).

What is aloo keema

Aloo keema (also called keema aloo) is a traditional Pakistani and North Indian dish made using ground mince and potatoes. It is usually made with ground beef, but other ground meat can be used such as goat, lamb, chicken or turkey. It is a dry-ish recipe, but can be prepared to have a little bit of gravy. This ground mince and potato curry is one of those staple meals that is perfect to make for a weekday dinner or when you can't think of what to make. Quick and easy to prepare and comforting to eat.

Making keema aloo is super easy and requires ingredients that are present in any South Asian household.

For more information on Pakistani spices and ingredients, check out my guide on how to stock a Pakistani pantry

Here's a step by step guide on how to make aloo keema.

Start off with frying the onions until light golden, and then add whole spices. Fry for a minute, and then add ginger garlic paste followed by ground mince of choice. Saute the mince on medium-high heat till the colour of the mince changes. This step is known as bhunai / bhunofying and is a mix of sauteing and searing.

Add the powdered spices, followed by the tomatoes (either freshly chopped or canned tomatoes). Cook the tomatoes till they soften mashing with a wooden spoon every few minutes. Add the cubed potatoes along with water. Cook the potatoes till they are tender, and then garnish with fresh coriander leaves (cilantro) and green chilies. Serve with roti or basmati rice.

Most keema recipes are made using beef mince, which has a high fat content. To make aloo keema (or any keema recipe) healthier, use lean beef mince. Or use chicken mince which has a low-fat content. Keep in mind that the fat in the beef mince does add flavor to the dish. To compensate, you can add a pinch more spice, and use fresh ginger and fresh garlic when using a low-fat mince option. I personally prefer to use turkey mince as it has more flavor than chicken mince but is leaner and healthier than beef mince.

Getting rid of the smell

Keema, particularly beef keema can have a strong meaty smell to it which can be off-putting. In Urdu, we call it ‘heek’. Here are some suggestions on how to get rid of this meaty keema smell.

Note: If the mince has turned either brown or grey on the outside. Or it has a strong rotting smell. That means it’s spoiled. Best to throw it away, and get another packet.

Keema aloo is homestyle comfort food. It’s traditionally served with roti or chapati, with a side of pickled onions, a quick and easy kachumber salad or a refreshing yoghurt raita. It can also be served with Basmati rice. You can serve this ground mince and potato curry with naan, with paratha or even slices of bread. In fact - the leftovers make for a super delicious sandwich!

Should I wash keema / ground mince?

This is a controversial question, and the answer is upto personal choice . The FDA recommend that meat should not be washed due to bacterial contamination. The risk is especially high in the case of chicken and ground mince. However, the idea of not washing meat is unpalatable in a Desi / South Asian household.
I personally do not prefer washing ground mince; however, I only buy from butchers and supermarkets where I can see it is clean and hygienically packaged. Otherwise I will get boneless chicken, and make my own chicken mince using a food processor. In that case, I can wash the larger chicken pieces and don’t need to wash the ground mince afterwards. If you do choose to wash ground mince use a fine mesh strainer, along with gloves to handle the meat. Sanitize the sink and surface areas afterwards.

Is it possible to make ground mince at home?

It is if you have the right equipment. For beef mince, you need a meat grinder. For chicken and turkey mince, you can make mince in a food processor. Just put pieces of chicken (or turkey) in a food processor and pulse for a few seconds till ground into mince. Don't process too much as it will turn pasty.

What to do with leftover aloo keema?

My favorite way to use up leftover aloo keema is in sandwiches. Spread a layer of keema on a slice of bread, mash the potatoes on top and then add ketchup, sriracha sauce or cheese. Top with another bread slice. Butter on both sides, and then toast in a sandwich press, sandwich maker, or on a frying pan till golden brown. It’s also possible to use the keema in wraps or in pita bread.

Can I freeze keema?

Yes, you can. I use freezer safe plastic containers or freezer bags to freeze the keema. To re-heat, tip the frozen keema into a medium sized pan. Similar to how you would take out ice cubes from an ice-cube tray. Add ½ cup water, and heat till it comes to a boil. Turn heat to simmer, and cook for a few minutes till warmed through.
Keep in mind that potatoes can get mushy when frozen.  Make the keema as per the recipe, and then add par-boiled potatoes when warming it up. 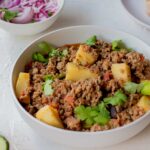 For the aloo keema (ground mince and potato curry)