Chicken yakhni or chicken broth is the Pakistani and Indian version of chicken soup for the soul. It is super simple to make, and the aroma fills up the house as it simmers on the stove. It is also comforting, highly nutritious and tastes delicious. It can be enjoyed on its own with a squeeze of lemon or used as a broth in different recipes.

Yakhni once made can be drunk on its own like a soup with a squeeze of lemon, along with salt and black pepper to taste. The boiled meat (be it chicken or red meat) is shredded and added back to the soup. This highly aromatic broth is also used in a variety of recipes in Indian as well as Pakistani cooking – for instance, to make chicken yakhni pulao (chicken pilaf) or mutton yakhni pulao (goat meat pilaf), or to enrich the gravy for meat and chicken recipes, and also as a broth in other soup recipes such as chicken corn soup.

The recipe that I am sharing today is for chicken yakhni or chicken broth / chicken soup, and it is a popular recipe during the fall and winter season as it helps in clearing congestion and is considered an effective home remedy for cough, cold and flu.

What cut of chicken should I use to make chicken yakhni?

To make chicken yakhni or chicken broth of any kind, it is important to use chicken bones as that is where the flavor lies. It is not necessary to make the yakhni only when fresh bones are available. The bones can be collected over the course of a few weeks and kept in the freezer until there are enough to make the chicken yakhni. My preference is to use chicken drumsticks or chicken legs (skinless), as the meat can then be shredded and used in other recipes such as to make soup or sandwiches. Other options include chicken neck, chicken wings, and the regular skinless chicken, cut into pieces.

Bring to a boil: Place water, chicken and aromatics in a pan to a boil. Lower the heat, and skim off the fat that comes to the top of the yakhni / broth.

Simmer, simmer and simmer: Cover the pot partially with the lid, and then simmer for at least 2 hours, preferably 6 hours.

Strain, and cool: Strain the yakhni / broth through a fine colander, or a muslin cloth and refrigerate. Take out the chicken pieces, and shred the chicken to eat with the soup, or use in other recipes. As the yakhni cools in the fridge, a layer of fat will solidify on the top after cooling, which can be removed.

Looking for more recipes to use this chicken broth in – check out the following: 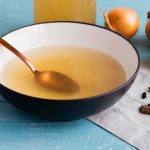 Chicken yakhni or chicken broth is the Pakistani and Indian version of chicken soup for the soul. It is super simple to make, and the aroma fills up the house as it simmers on the stove. It is also comforting, highly nutritious and tastes delicious. It can be enjoyed on its own with a squeeze of lemon or used as a broth in different recipes.
Course Dinner, Soup
Cuisine Indian, Pakistani
Prep Time 10 minutes
Cook Time 4 hours 30 minutes
Total Time 4 hours 40 minutes
Servings 6 people
Calories 40kcal

For the chicken yakhni / chicken broth:

Any chicken parts can be used to make chicken yakhni as long as they are in bone in chicken pieces. Options other than drumsticks include chicken necks, chicken wing, and the regular skinless bone in chicken curry pieces.
« Assorted Mini Cheese Balls
Vegetarian Mulligatawny Soup | Vegan and Dairy Free »