Fish biryani is a layered fish and rice dish from the Indian sub-continent. This recipe is of the Pakistani style fish biryani made with boneless fish and layered with aromatic Basmati rice and a flavourful fish biryani masala. Serve hot with raita on the side.

So I realised that as much as I love biryani, I actually don’t have a biryani recipe on the blog. Can you believe that?!

Also, just a note - this is the first of hopefully many biryani recipes on the blog.

Biryani is a layered meat and rice dish with roots in Persian cuisine. Biryani is usually made with meat (chicken, mutton / goat meat or beef) but there are seafood options such as this fish biryani as well as prawn biryani. There is also vegetable biryani though most hard core meat lovers end up calling vegetable biryani pulao. Either ways, whatever the protein used, biryani is delicious!

There are two main types of biryani:

Kache gosht ki biryani (biryani made with raw meat) – this particular biryani is associated with Hyderabadi cuisine, which is food from the province of Hyderabad Deccan in India. The biryani is made with raw meat and parboiled rice that are cooked together. There is a lot of skill that goes into making this biryani because the raw meat has to be completely cooked without the rice getting overdone.

Pakke gosht ki biryani (biryani made with cooked meat / qorma) – in this biryani the meat of choice is cooked separately, and the rice is parboiled. The cooked meat gravy (known as qorma) is layered with the parboiled rice, and steamed till the rice is done.

The fish biryani recipe that I am sharing today is based on the 2nd method.

How to make Fish Biryani?

What type of fish to use for Pakistani style fish biryani? 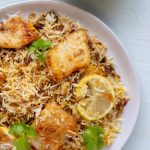 For the fish marinade:

Marinating and frying the fish

For the fish masala gravy (qorma):

Calories: 350kcal
Tried this Recipe? Tag me Today!Mention @MirchiTales or tag #mirchitales!
« Apple Biscoff Turnovers | Apple Turnovers with Lotus Biscoff Glaze
10 reasons why a multi cooker is an essential appliance in a Pakistani and Indian household. »