A recipe for traditional chicken korma made in the Pakistani or North Indian style with chicken, yoghurt, whole spices and lots of fried onions. Serve with sheermal for the authentic Mughlai touch.

Korma or Qorma is a dish reserved for special occasions in Pakistan. For a fancy dinner at home, for Eid, or for a dawaat. It’s also an essential Pakistani wedding food item served with taftaan or sheermal.

The dish korma originated from the courts of the Mughal dynasty who ruled over the Indian subcontinent between the 10th -16th centuries. One of the techniques introduced by the Mughal cooks was to marinate meat in yoghurt with spices and onion and then simmering to tenderness.

When Indian subcontinent was under British rule, many Indian recipes were simplified to suit British tastes. Lizzie Collingham states in her book Curry “Lucknavi quaramas were transformed into Anglo-Indian ‘quoremas’ or ‘kormas’, which were different in substance as well as name”.

That is why the dish korma normally found in British Indian restaurants is a simplified version of the original.

Why this recipe works

There are certain key ingredients that are necessary for an authentic chicken korma – whole spices, fried onions, yoghurt, and bone-in chicken pieces.

Check out my guide on how to stock a Pakistani Kitchen + Pakistani Pantry List (with English translation and descriptions).

Making a traditional and authentic chicken korma is super easy.

Step 1: Fry onions in hot oil till they are golden brown. Drain in a colander - this helps them crisp up further. Crush the crispy onions and set aside.

Step 2: Fry whole spices (sabit garam masala) in oil till they release their flavour and aroma. Then add chicken and ginger garlic paste.

Step 3: Once the meat (goat meat or chicken) is browned, add yoghurt. Turn heat to low, and whisk the yoghurt well before adding to the meat. This will prevent the yoghurt from splitting.

Step 4: Cook the meat in the yoghurt till it’s tender, and you can see the oil separating from the top.

Step 5: Add the crushed fried onions, and cook for another 5 - 10 minutes till a beautiful reddish-brown gravy is made.

Step 6: Add kewra water, followed by sliced ginger to finish off the dish.

Serve chicken korma with naan or chapati / roti. It can also be served with plain Basmati rice. A traditional bread served with chicken korma is sheermal, a mildly sweet naan made with all purpose flour and yeast that is baked in a tandoor.

It’s flavoured with saffron. Sheermal can be purchased from an Indian or Pakistani grocery store. On the side you can serve a refreshing raita or a light and tangy kachumber salad.

Chicken korma can be kept in the fridge for upto 3 days easily. It’s best warmed in a saucepan on the stove. Reserve the garnish of ginger and almonds, and add before serving. It can also be stored in the freezer in an air-tight container.

A note on chicken curry pieces

The sub-continental style of cooking chicken in a gravy ensures that even though a mix of different cuts is used, the meat doesn’t dry out. This cut can be found in South Asian or Middle-Eastern butchers abroad. Or buy a full chicken, skin it, and cut it into pieces yourself.

Can I substitute with any other meat?

. This recipe can be used for goat meat / mutton or lamb. Best to use bone-in goat or lamb curry pieces. Increase the total cooking time, adding extra water if required.

What if I don’t have all the spices?

Can I use a pressure cooker to make korma?

To make korma in the pressure cooker, cook the meat till it’s almost tender. Release pressure, and add the crushed fried onions. Use saute / sear mode to continue cooking for another 5 minutes to finish off the cooking process.

Can I use a store-bought spice mix?

Yes, you can. The one that I have used is by Shan Foods. However, National is also a good brand.

Can I use store-bought fried onions?

Fried onions are an essential part of Pakistani cuisine forming the base of many different gravies. The process of frying them can take time, which is why bags of fried onions (known as barista) can be found in Indian and Pakistani stores easily. Make sure you get the ones that aren’t dusted with cornflour. Use around 1 - 1 ¼ cups for the amount of onions in this recipe. 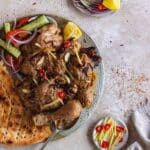