Baingan ki Borani or Borani Banjan is a vegetarian recipe comprising of fried eggplant in a spicy gravy, topped with yogurt, coriander and onions.

One of my favourite vegetarian dishes growing up was what my mother called "Baingan ki Borani" - a dish that consisted of fried eggplant that was coated in a spicy onion paste, topped with yoghurt, onions and coriander.

I later found out that the recipe is also known as "Borani Banjan" and it originated from Persia and  borani basically refers to a dish of vegetables (cooked or raw) served with yoghurt. The origin of this recipe dates back to Sassanide (224-651 AD), at the time of Queen Pourandokht, who used to get her chef Corte to prepare simple dishes based on yogurt and vegetables. Inspired by her name, these dishes were called Pourani, which over time became Borani. This particular recipe is also popular in Afghanistan and can be found in menus of Afghani restaurants in Pakistan and elsewhere. How is baingan ki borani or borani banjan made?

There are three components to making baingan ki borani - the components can be made in advance, and the dish assembled before serving.

The combination of yoghurt and vegetables makes it a refreshing dish for the summers.  It can be served on its own with roti or as a side with rice (for e.g. with matar pulao or sabzi pulao or aloo ki tahari).

If you are looking for other vegetarian recipes, do try out the following: 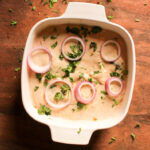 Baingan ki Borani or Borani Banjan is a vegetarian recipe comprising of fried eggplant in a spicy gravy, topped with yogurt, coriander and onions.

Eggplants tend to absorb a lot of oil when fried. That's why it's best to shallow fry them in a non-stick pan, adding as little oil as required. Alternatively, you can bake the sliced eggplant in the oven. My preferred method, however, is using a sandwich press (with hot plates). It uses minimal oil and the sliced eggplants fry off very quickly.  This can be served both cold as well as on room temperature. However, it cannot be warmed because it contains fresh yogurt. 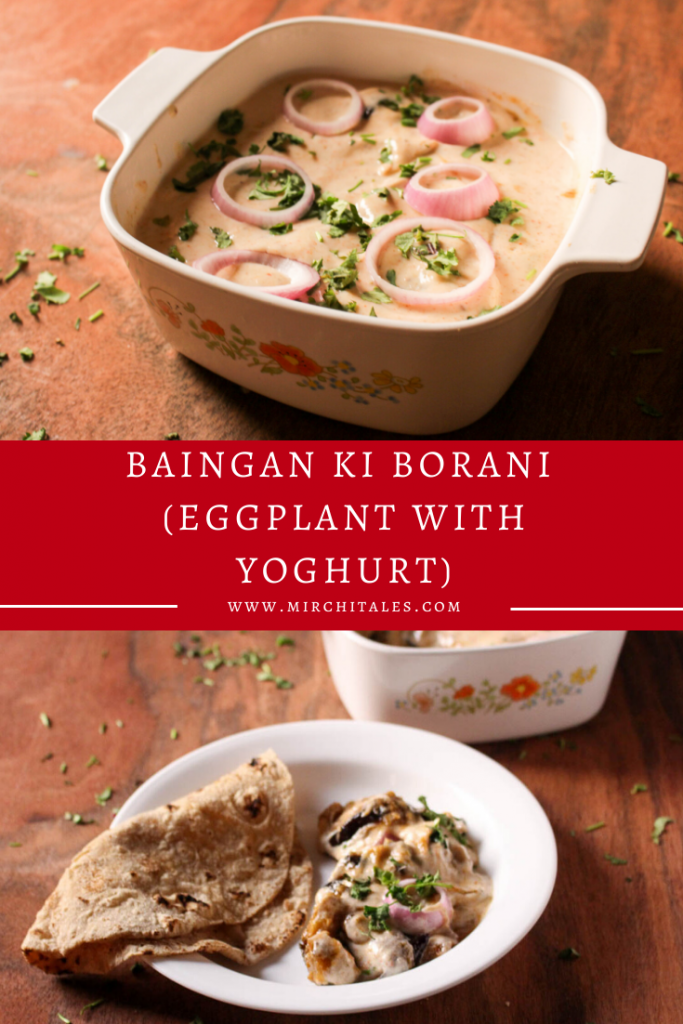