Paneer tikka sandwich is a deliciously spicy sandwich made with coriander and mint chutney, paneer seasoned with tikka spices, vegetables and lots of cheese on top. The sandwich is then baked in the oven (or air fryer) till the cheese melts. The paneer cheese toast can be enjoyed as a weeknight meal, as a snack with tea, or a lunch box option for kids and adults. The recipe also includes freezer instructions, so you can make a batch and keep in the freezer for quick meals and snacks.

This spicy paneer sandwich recipe is one that you will make again and again. I love the open-faced sandwich format for entertaining and to enjoy with a cup of chai. Enjoy it as a light weeknight dinner option. Or cut it up in half and add it to lunch boxes. Or take it to a picnic. In case you are out of bread, make a wrap or just eat the paneer filling as is. It’s that delicious!

Why this recipe works

The balance of ingredients is what makes this recipe stand out. There’s the spicy paneer (or Indian cottage cheese) that’s grilled for extra crunch. The green chutney that adds both heat and flavor. The vegetables add a layer of freshness, and the cheese adds the melt factor. The toasted bread brings it altogether.

Paneer or Indian cottage cheese is a fresh cheese made from cow or buffalo milk. It’s a super popular cheese in the Indian sub-continent. It is made by curdling milk with an acidic agent, such as lemon juice, vinegar or yoghurt. The loose curds are known as ‘chena’, and they are pressed together to form paneer. Once pressed, the paneer can be sliced, cubed or grated. As paneer is a type of cheese that doesn’t melt, it’s great for frying or grilling. And used as a filling in sandwiches and wraps.

The bread: My favourite bread for this recipe is mini Turkish bread / pide that I slice in half, and then top with the sandwich ingredients. In Australia they are called Turkish bread or Turkish rolls and are sold in packs of 4 at the supermarket. Other options for bread include Subway style sandwich bread, mini ciabatta, flatbread, naan, pizza base, or just bread slices.

Coriander and mint chutney / Green chutney: Green chutney is what gives this paneer sandwich spice and flavor. Use store-bought chutney, or you can make your own. I have a recipe for green chutney that can be kept in the fridge for 2 weeks.

Paneer: Paneer is easily available at Indian grocery stores or the supermarket in the cheese aisle. It’s also possible to make homemade paneer using milk and lemon juice (or vinegar).

Spices: I have prepared my own spice mix, but you can use a store-bought spice blend as well, such as tikka masala or tandoori masala.

Vegetables: I have used onion, and green capsicum / green bell pepper in this recipe. You can use a mix of whatever vegetables you prefer. Or skip them.

Cheese: The ‘icing’ on this sandwich! Any cheese can be used, as long as it melts well. I usually use cheddar. Other options include cheddar, mozzarella, Colby, pepper jack, pizza cheese.

1. Dice the paneer (Indian cottage) into cubes toss with the spices. Marinate for 15 minutes.

2. Heat oil in a pan. Fry the marinated paneer till golden brown. Remove and set aside.

3. In the same pan, fry the diced onion and capsicum. Season and set aside.

4. Slice the Turkish bread in half. If you are using regular sandwich bread, just use as is. No need to slice.

5. Start the assembly process. A layer of green chutney, followed by the vegetables then the fried paneer. Finally add grated cheese on top.

6. Place the assembled paneer tikka sandwich in a pre-heated oven or an air fryer. Bake till the bread is toasted, and the cheese is melted. You can also grill on the stove. But in that case, top with another slice of bread and butter both sides. Grill till golden brown on both sides, and cheese has melted.

7. Cut into pieces and serve with more green chutney on the side.

The filling for this paneer sandwich is super versatile and can be used in a variety of ways such as:

Can I freeze this recipe?

Yes, you can. I make a large batch when meal prepping and keep in the freezer.

To freeze, assemble the paneer cheese toast / open faced paneer sandwich on a flat tray or baking tray. Use a parchment paper or clingfilm to press the cheese down into the bread. Place the tray carefully in the freezer. Make sure the tray is straight, and the cheese doesn’t touch the top of the freezer. Once the paneer tikka sandwich is frozen (this will take around 2 – 4 hours), take the tray out and wrap the pizza in clingfilm individually. Place in the freezer. Take out as needed and bake (or airfry). Frozen paneer tikka sandwich will take an additional 2 – 3 minutes to bake versus fresh paneer cheese sandwich.

In case paneer is not available, a firm cheese like feta or halloumi can also be used. The procedure and marination will be the same, but the salt content may need to be adjusted as halloumi and feta are both on the salty side. It is also possible to substitute the paneer for meat such as boneless beef or chicken strips to make a non-veg version of the sandwich.

Can I make the sandwich in advance?

The chutney and the filling can be made in advance and kept in the fridge. Keep the filling in an airtight container, else it will dry out. The sandwiches can be assembled about 45 minutes – 1 hour before serving. Cover them lightly with foil or a tea towel so the filling doesn’t dry out.

How to re-heat the sandwich?

Other snack recipes to try 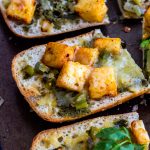